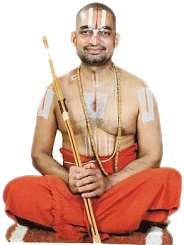 Sri Chinna Jeeyar Swami became the head of Srimad Ubhaya Vedanta Acharya Peetham at Nadigaddapalem in 1981. Since then, HH Sri Swamiji spearheaded many spiritual and service activities under the wings of Jeeyar Educational Trust and Vikasa Tarangini for the benefit of the community across the world.

An Acharya is the one who practices first, and then preaches. Sri Swamiji exemplifies this.  He is a saint with deep intellectual and spiritual sensitivity, an embodiment of rare virtues. He is an epitome of boundless love for all beings.  All His activities show His deep concern and compassion for the society which to a large degree lacks real spiritual dimension.

Any devotee can observe excellence in all aspects of His living. Right from Swamiji’s pristine appearance, His refined way of speech, the affection with which Swamiji addresses people in general, the lucidity and potency in His speech that can uproot ignorance in the receptive, all of this can be conspicuously observed and learnt from.

At the same time, He is the embodiment of detachment and renunciation. He is beyond any influence of the material world and its qualities, “gunas”. His presence permeates a strange feeling of divine happiness and peace in everyone around.

Swamiji wants to inculcate in our people, young and old, awareness of our heritage. He is always on the move most of the time meeting people and listening to their worldly and spiritual problems. Devotees get relief by just looking at His radiant, ever smiling face. His compassionate look cleanses our mind and raises our consciousness from the mundane to the divine. Blessed are those who have come under the influence of the revered Swamiji.

His Holiness conducted Virat Parayanam of Sri Vishnu Sahasranama Sthothram with lakhs of devotees at Vijayawada in 1994, at Visakapatnam in 1995, at Madras in 1996, near Hyderabad in 1997, and at Guntur Vaishnavipuram in 1998. This was a unique programme unheard of till today.Countless discourses on Ramayana, Srimad Bhagavadgitha, and the Upanishads were delivered by Sri Swamiji all over the world.

HH Jeeyar Swamiji during his 35 years as a Jeeyar, head of the organization, has inspired millions of youth all over the world to learn the art of service. HH educated communities to  live in harmony with the environment. With ‘Prajna’, an early educational and development program for children, HH is building a stronger future.

HH discourses are profound and He incorporates examples from all subjects and walks of life enabling common man to relate even the toughest and complex Vedic principles. HH gives the quintessence of all complex, topics beyond comprehension providing it on a silver platter for any seeker to incorporate easily in one’s lives. There is rarely a person who is not swayed by the simplicity of the language and enthralled by the beauty of His diction.

From five in the morning till midnight or even later, Swamiji is busy spreading the message of Vedas, Upanishads and messages of great seers tirelessly. He never says ‘no’ to people who want to see Him even at midnight. He is unmindful when it comes to attending to His needs but very active in attending to others’ sufferings.

For the inquisitive, He is an unparalleled spiritual teacher;
For the intellectuals, He is an erudite scholar and philosopher;
For the suffering parts of the world, he is an ambassador of peace;
For the grief stricken, He is an ever-helping inspiring leader, eloquent speaker, a reservoir of divine qualities;
And a uniquely distinguished representative of world’s most ancient but ever fresh Vedic knowledge and practices.
Living without being with Swamiji is living without knowing what it “means” to live or to love. The entire fortune of humanity is elevated in the existence of such a single personality on Earth. His mere presence appears to eradicate the hardships of the suffering humanity.