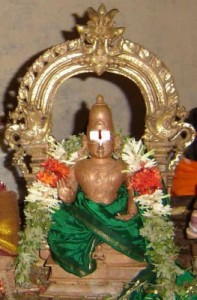 Sri Parasara Bhattar and his brother Sri Veda Vyasa Bhattar were born out of the divine grace of Sri Ranganatha.

Koorathazhwan and Andal used to stay in Srirangam. Koorathazhwan used to go around everyday to collect grains and pulses which people used to donate. Once it was raining and Koorathazhwan could not got out. The couple were left hungry that day. Koorathazhwan without any regret was resting that night. Andal then heard the bells from Srirangam temple, indicating that food offerings were being made to Lord.

She thought to herself, “Oh Lord, here your devotee Koorathazhwan is lying hungry and You are enjoying a feast”. After the offering was done, Lord SriRanganatha asked uththama nambi to take the offered food to Koorathazhwan.

Koorathazhwan was surprised and asked Andal if she asked Sri Ranganatha for this. On hearing her thought he got upset and just took a morsel while Andal had rest of the food offering sent by Sri Ranganatha. This holy food offering (prasadam) eventually blesses the couple with two divine beautiful children, Parasara and Vyasa Bhattar.

Embar (Govinda Bhattar) initiates both these children with Dvaya mantram when they were just eleven days old. Being born directly due to the grace of Sri Ranganatha, they used to be cradled in swings between the pillars in the sanctum sanctorum of SriRanganatha.

From childhood, Parasara Bhattar was bright and intelligent.

Sri Parasara unlike other children could grasp and recite vedic verses in the first attempt, while other children had to recite them for at least 15 days before they could memorise.

Sri Parasara is filled with divine qualities one of which is humility. He led by example and showed us the path to follow through some of these incidents in his life.

In Srirangaraja stotram he talks about, Once a dog entered the Srirangam temple because of which the temple authorities had to perform a clean-up of the temple. Sri Parasar Bhattar asks Lord Ranganatha why do the authorities not perform the clean-up when he (bhattar) enters the temple. This clearly indicates the humility in Bhattar considering himself lower than a dog

In another verse he mentions that he prefers to be a dog in the streets of Srirangam than being a demigod in the heavens.

Another time, some temple authorities started scolding Bhattar out of jealousy. To their surprise, Bhattar thanked them. He then said every devotee should praise Lord and lament on faults of oneself. Bhattar said he was so immersed in praising Lord Ranganatha that he forgot to lament on himself and these authorities reminded him about it.

Bhattar was the first to document rahasya thrayam in a piece of work. His ashta sloki is a master piece, where thirumanthram, dvaya manthram and charama slokam are explained excellently in just eight verses. Also, in srirangara:ja sthavam, he explains most complicated vedic meanings in simple verses. In vishnu sahasranama vyakyanam, he shows that each name of Lord relates to a particular quality of Lord and his explanations are of absolute beauty. Sri guna rathna Kosham is a dedication to sriranga nachiar (Goddess Lakshmi) which is unparalleled to any other work.

Bhattar lived a short life compared to other acharyas. He invited everyone home for a holy feast and while singing the praises of Lord Ranganatha left his body and back to Godhead.

Let us all pray that we get Sri Parasara’s blessings to grow spiritually and develop love and devotion towards Sri Ranganatha.