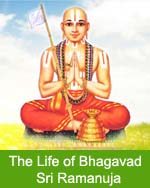 Ramanuja is regarded as the greatest theologian of the Vedic Lineage. The first of the great acharyas of the Vishistadvaita philosoply , Nathamuni, was from a traditional family of Sanskrit scholarship. His father was Iswarbhatt and his son was Iswaramuni. They lived in Viranarayanapuram. Nathamuni, is said to have taken the first steps towards a collation of Vaishnava philosophy and theology. The names of his two Sanskrit works are remembered and quoted, but neither has survived. Nathamuni also compiled the hymns of the Alvars, into a collection of four thousand verses (Nalayira Divya Prabandham). He also made arrangement for these “poems” to be chanted along with the Vedas during the services at Srirangam temple. He is also renowned as the founding father of Yoga. Yoga is the achievement of liberation from the cycle of bodily existences through a difficult process of mental and physical disciplines. The organization of the Vaishnava community was achieved by Nathamuni’s grandson Yamunacharya who was an accomplished Vedic scholar as well as a Vaishnava savant. Adopted into a royal family he lived a luxurious life in early days, but converted later and took to an ascetic life. He succeeded in consolidating the Vaishnava community and establishing Srirangam temple as their headquarters. It was his great ambition to merge the devotion of the Alvars with the Vedantic methodology. He could not himself achieve this ambition but towards the end of his life he met Ramanuja and recognized in him the competent Vedic scholar who could do it. The mission was entrusted to Ramanuja through his five principle disciples. Today there are over 700 Srivaishnava monasteries in all parts of India.

Works of Ramanuja – The Opus Magnus of Ramanuja is the Sri-bhashya — a commentary on the Vedanta-sutras of Badarayana which is one of the three basic texts of Vedanta (the others being the Bhagavad Gita and the Upanishads). Besides this, he produced nine other works. These are:—

Index of the document: