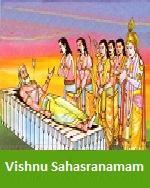 To realize the divine and use every bit of our knowledge & wealth in his service is a great boon in one’s life. In the ecstatic state of love towards God, a devotee feels the causeless compassion of the divine and begins to pray him and sing his glories in every possible way.

Our great ancient Rishis, A:lwa:rs and A:cha:rya:s have experienced the divine. They poured out their divine experiences in the form of sacred compositions delivered involuntarily, recorded by their followers. “Bhagavad Githa” and “Sri Vishnu Sahasra Na:ma Stho:thram” were the 2 gems hidden in the mighty ocean of Maha:bha:ratha. Lord Sri krushna himself taught Bhagavad Githa to Arjuna. Whereas Sri Vishnu Sahasra Na:ma stho:thram was revealed by Bhishma:charya to Pa:ndava:s when he was on the bed of arrows (Ampa Sayana), after the Maha:bha:ratha war.

Krushna took Pa:ndava:s to Bhishma and requested pitha:maha (grandsire) to teach the Pa:ndavas about the ultimate “Truth and Dharma”. Bhishma was so weak physically and mentally being on the bed of arrows. Krushna promised pitha:maha Bhishma that he would restore his memory that was buried deep due to the pains in his body.

Pa:ndavas approached Bhishma to teach them the higher principles of life and wisdom, from all his great experiences. Bhishma, who is a great Man of Action and Sacrifice, mastered the whole Dharma Sastra and practiced it strictly throughout his life. Even the Lord of death feared to approach Bhishma without his permission. Dharmaraja asks him to tell them the greatest of the secrets that made him so great and that he thinks is the best that can liberate all beings from the cycle of birth and death and lead them to planes of highest happiness, bliss, The Lord.

Then Bhishmacharya having obtained boon from Lord Krushna to be able to speak in clear voice and memorize his past deeds reveals the essence of all that he learnt from a number of sages who had the vision of Lord in different forms. Bhishma observed a number of austerities imposed by the sages, served them for long periods, satisfied them that he deserves to be taught the secret they have obtained after strenuous efforts, and finally obtained from them the secrets. Like a honeybee that collects the honey drops from all the flowers, Bhishmacharya collected all the manthras from different sages and composed Sri Vishnu Sahasra Na:ma Stho:thram, which he used to practice daily.

When Dharmaraja asked him to reveal the greatest of secrets, Bhishma reveals this to Pa:ndavas on Maagha Suddha Eka:dasi day in presence of Lord Krushna, showing him and telling them that he is Lord of all Lords and praying him with all thousand names is all one can ever do to become more dear to him which itself leads to salvation. Reciting it regularly or even listening to it is itself a great thing that empowers one with the strength to overcome all the difficulties and get on to the right path of salvation. As it was imparted from a great acharya chosen by the Lord Himself, Sri Vishnu Sahasra Na:ma is considered the essence of Githa and all the Vedas.

In view of this, Acharya HH Sri Sri Sri Tridandi Chinna Srimannarayana Ramanuja Jeeyar Swamiji is conducting mass chanting of Sri Vishnu Sahasra Na:ma Stho:thram for the sake of world peace since 1994 to bless us all with the secret of the secrets and empower us with Health, Wealth and Wisdom and to lead righteous and happy life. How fortunate we are if we are with our Acha:rya taking upadesam from him about the best of the secrets a man needs to know in his life!!