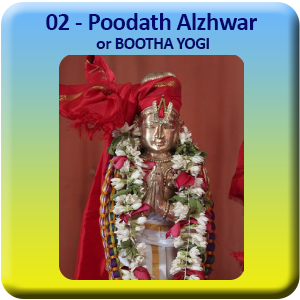 I worship bhUthathAzhwAr who is the leader of thirukkadalmallai (mAmallapuram) and was born out of a mAdhavI (spring) flower and who lit the lamp of knowledge to have the vision of the supreme lord.

It is said that Bhoodham in Sanskrit means a person who is blessed.