Swamiji resorts to a well-known parable. A great scientist had once to cross a river. He boarded a boat and indulged in freewheeling conversation with the boatman during the course of the voyage.

Scientist: “What will happen to the small gram of sand if it is dropped in the river?”.

Boatman: “It will sink, sir”

Scientist: “Do you know then, why the boat doesn’t sink, though it is heavier than the grain of sand”

Scientist: Sneered at him with a sense of superiority. “How come you don’t know this though you live on the boat day in and day out Half of your life is wasted”.

After some time,
Scientist: Pointing at the clouds and asked the boatman what do they contain?”.

Scientist: Threw up a little water. It fell down. “You’ve noticed that this little water, when thrown up, fell down promptlly. Have you ever thought as to how the clouds hold so much of water in them, up above the sky?”

Boatman: Still perplexed and said that he never thought of it.

Scientist: “You realise how three fourths of your life is wasted in ignorance? You’re bom and bred in this water. Yet you know little about it”

As the conversation was going on, the weather suddenly changed. Soon there blew a storm. The boat was rocked up and down by the turbulent waves. It was now the turn of the boatman to question the scientist.

Boatman: “Sir, Do you know swimming”

Boatman: “There is no hope of reaching our boat to the bank in this storm. In a few seconds, the boat may sink. Unless we swim, there’s no hope of surviving this storm”.

Scientist: “Oh God, I cannot swim. What shall we do now?

Boatman: “Sir, I am an illiterate. I know little of what you asked. But I am safe now because I know swimming. All your knowledge is of no avail now. I am sorry, God alone can save you”.

Thus saying, the boatman jumped into the river and swam to the shore, while the scientist was swallowed by the raging river. This story tells you that one should have knowledge of essential things. Thus, to get across the ocean of life successfully, one should have the five fold knowledge (1) Who am I? (2) What is the goal of my life? (3) Who gave it? (4) What are the means of achieving it? (5) How to remove the obstacles. 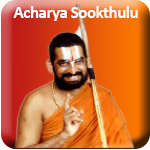 What is the relationship between Us and the Universe? Jun 04, 2016