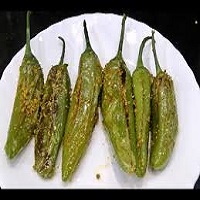 How to prepare Bhariwali Mirchi?

Bhariwali Mirchi is a hot / spicy dish which is made of the following ingredients.