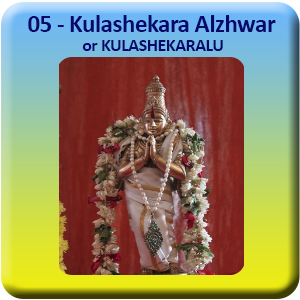 I bow my head down and worship kulasekara Azhwar in whose capital city there is constant hailing about srIranga yAthrai (travelling to Srirangam).

Kulasekhara Azhwar was a prince in his kingdom and also a prince among the azhwars. Hw was born into the royal family of Chera king Dhidavradhan and Nadhana Azhagi. Even though people born in such families are in the mode of passion with ego and pride, our Kulasekhara azhwar was completely the opposite with qualities of humility and servitude. Because of his great devotion to Lord Sri Rama (Perumal), Kulasekhara Azhwar came to be known as Kulasekhara Perumal.

In his pasurams (poems), he glorifies to show the significance of srivaishnavas. As a king he used hear the glories of Sri Rama as part of Ramayana. Once he was so engrossed listening to the pastimes of Sri Rama, that Kulasekhara azhwar ordered his soldiers to march towards Lanka to help Sri Rama in the war against Ravana.