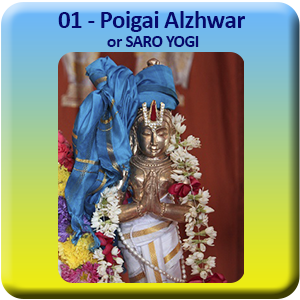 I meditate on Poigai AzhwAr who was born in the pond in thiruvekkA out of a golden lotus flower and who lit the divine lamp using the radiant sun to have the vision of sriman narayanan.

The entrire universe is split into 4 categories of elements:
1. Human Beings
2. Tiryak (things which can fly, swim,crawl)
3. Still Objects (like Stone, Hills, Homes etc)
4. Jangamas (These are the ones which supports other categories e.g. Air, water, Sun etc devathas)

Meaning:
” Lord Srimannarayana is the cause of this wonderful universe and the seas; He holds the divine discus; As a means to cross the miserable ocean of ‘Samsara’, I am dedicating this garland of verses. I had His vision in the light of the lamp of earth, the lubricant ghee being the waters of the ocean. The bright Sun is the one that sheds light on this.”
Vaiyam : Universe,
VaarKadal : The sea surrounding it,
Thagazhi : Lamp,
Veyyak Kadirone : The hot Sun,
Seyya : Beautiful,
Sudar Aazhi : Lustrous discus,
SonMalai : Garland of words (verses),
Idar Aazhi : ocean of misery (Samsara)

There are 2 more alvars, who appeared in Dvapara yugam, whom we have to know about. They are Poodath Alvar and Pei Alvar. These 3 alvars together called “Munitrayam”. And so they are called “Mudhal alvars”.  As Poigai Alvar is the first one who started promoting Bhagavad Tattvam same as Panchajanyam (Sankham) and so he is treated as Panchajanyam incarnation. Because of the qualities of pleasant sarassu (pond) he is also known as Sara Yogi.