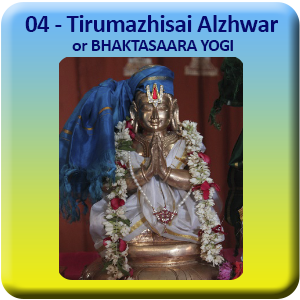 My obeisances unto thirumazhisai AzhwAr who resembles the essence of bhakthi towards the lotus feet of murAri (emperumAn who killed mura) who can bestow us the divine mOksham. He holds the divine form of emperumAn which is made of divine matter (In this material world, our form/body is made of pancha bhUthams – earth, water, fire, air and ether. But bhagavAn’s form is made of pancha upanishadh – vishwam, nivruththa:, sarva:, paramEshti, pumAn) in his heart and is most attractive to view. Another interpration is, the one wearing the necklace won over from king sUkthri hAran.

Thirumazhisai Azhwar was born to Bhargava Rishi and Kanakangi. Seeing the foetus was lifeless with no limbs, the couple with unwillingness and depression left it at a bamboo bush. Lord appeared and blessed the baby with limbs. This baby was picked up by a farmer couple, Thiruvalan and Pankaya Chelvi and were filled with joy.

Azhwar did not have anything to eat or drink as he was immersed in thinking about Lord. Hearing his glories, when Azhwar was of seven years, an old couple visited and the lady fed him some warm milk. Azhwar happily drank the milk and the reminiscence was consumed by Pankaya Chelvi. After drinking this milk, Pankaya Chelvi had a son called Kanikannan who in due course of time became a disciple of Bhaktisara.

Pey azhwar was once planting and watering a plant with its roots upwards and the leaves and stems in the soil. Thirumazhisai azhwar who was passing by asked the reason behind the strange behaviour. Pey azhwar told him that just like it is futile to water the leaves and branches of a tree for it to grow instead of the root, it is equally futile if one does not understand that and surrender to the one Supreme Lord.

Thirumazhisai Azhwar was serving in Thiruvekha temple in Kanchipuram along with Kanikannan. An old woman also used to serve in the same temple by cleaning and decorating the temple everyday. As days passed she was regretting that her age is hindering her from doing the service. To this, Azhwar transformed her into a young beautiful woman. The local king got attracted and married her. As the king himself was aging, he asked Kanikannan to ask Azhwar to restore the kings age too. To Kanikannan’s refusal to do so, the king banished him from the kingdom. Kanikannan informed Azhwar who in turned informed Lord in Thiruvekha temple, and all three left the kingdom. When the king saw that without Lord, the kingdom is not prosperous anymore, he realised his mistake and asked all three to come back.

These are just a few of the glorious pastimes of Sri Thirumazhisai Azhwar.