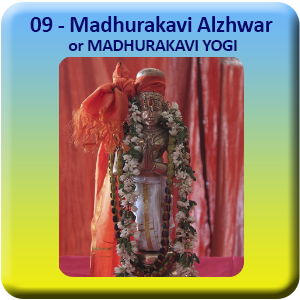 Let madhurakavi Azhwar be firmly established in my heart. He did not know any one other nammazhwar, considered singing nammazhwar’s pasurams as the only enjoyable activity and naturally considered nammazhwar as his only master.

This is because even though one has surrendered themselves to the Supreme Lord, it is only by Lord’s wish and desire we will attain Him. But if we surrender ourselves to an acharya, then it is guaranteed that through acharya we will certainly attain Lord

The Lord is more pleased if we serve His devotees more than directly serving Him. Madhurakavi azhwar is a perfect example for this fact. For him, Nammazhwar was his supreme master and he knew none other than Nammazhwar to write and dedicate his paurams (poems) to. All the other azhwars wrote the tamil divya prabhandhams (poems) dedicated to the supreme Lord.

Madhurakavi azhwar was on a pilgrimage in north India and while he was in Ayodhya, one night he saw a bright glow emerging from the southern direction. He became very inquisitive and started to follow the glow. This during the day he would take rest and at night follow the glow until he reached Azhwar Thirunagari where he sae the glorious Nammazhwar, a 16 year old sitting in deep trance under a tamarind tree. He throws a stone at Nammazhwar which wakes him up.

To check whether he is able to speak, Madhurakavi azhwar asks him a question “If a jivathma – sentient enters an achethanam – insentient, what will he enjoy and where will he stay.”

Madhurakavi azhwar get convinced that Nammazhwar is no ordinary person and decides to stay there serving Nammazhwar and singing his glories.