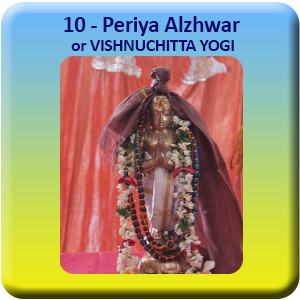 Sri Vishnu Chittar was born in a pious family in Sriviliputtur in South India
Sri Vishnu Chittar used to do many services in Sriviliputtur temple of Lord Sri Krishna. But he thought to himself, “which one service can I do consistently?”
One day he was reading Sri Vishnu Puranam.
In that there is a story of Sri Krishna & Balaram going to Mathura from Brundavan to kill Kamsa. On arriving at Mathura Krishna was greeted by many devotees who offered Him sandalwood paste etc. Then Krishna asked about the maalakar (person who makes flower garlands) and went to his little place. Malaakar’s joy knew no bounds when he realised the the Supreme Personality Himself visited his house allowing him to serve the Lord with beautiful garlands. Maalakar paid obeisances to Krishna for mercifully coming to his place and giving him His darshan.
After reading this story Sri Vishnu Chittar decided to create a flower garden for the service of Lord Krishna in Srivilliputtur. He himself planted many beautiful, fragrant flower plants, nurtured them, plucked the flowers and made garlands for the Supreme Lord for rest of his life.

Once a Pandya king Vallabha Devarajan under disguise at night asked a scholar to recite a few words of wisdom. Upon which the scholar said “We work hard during the day to peacefully sleep at nigh, we work during the year to save for any droughts, we work throughout our lives to save when we retire, Similarly what should we do in this short lifetime to reach the Supreme Lord ?” The king fell in deep thoughts on who is the supreme. On his priest, Selva Nambi’s advice, the king summoned all the scholars across the region to answer this key question. Sri Krishna came in Periya Alwar’s dream and asked him to goto the kings court for providing the answers to the king. Alwar felt unqualified for this task upon which Krishna assured that He would be behind the alwar performing this task.

As per Sri Krishna’s instructions in his dream, Sri Vishnu Chittar went to King Vallabha Devarajan’s court the next day. Priest Selva Nambi had tied a bag of gold coins to a pole. With Selva Nambi’s mantric and tantric skills, the bag of gold would fall at the feet of the scholar who would speak the truth about the Supreme Lord. Sri Vishnu Chittar walked with a divine glow into the kings court and proved the Supreme Lord to be Sriman Narayana by reciting the Paratatva Nirnaya. The bag of gold fell at his feet. Pleased, the king made Sri Vishnu Chittar sit on his elephant for a pomp procession. To see Their child being served by everyone, Lord Narayana and MahaLakshmi descended on Garuda. To this day on Swati star, in most of the Divya Desam temples, there is a procession of Periya Alwar on an elephant palanquin while Lord Narayana and His consorts on Garuda with the Paratatva Nirnayam being recited by devotees.

While Sri Vishnu Chittar was being taken on the elephant procession, he saw Sriman Narayana along with Mahalakshmi on Garuda in the skies above. He immediately started singing Mangalasasanams (blessings) to them. Usually elders bless youngsters and not vice versa. Why then did the alwar bless the Lord ? Alwar forgot his identity and through Vatsalya bhava (parental mood) wanted to protect Lord and His consort who are so delicate from the eyes of everyone around. Because Sri Vishnu Chittar was the only alwar who was in this mood of blessing the Lord, he came to be known as Periya Alwar (Elder saint). This song of blessings is what we call ThiruPallandu and is sung by all devotees today on a daily basis.

Being attracted by the motif of mother – child relation depicting instinctive love and affection, Periyalwar chose the role of mother Yashoda to enjoy and pour out his devotion towards pastimes of Sri Krishna. In Periyalvar thirumoli comprising of 461 hymns, he covers the experiences of Lord Krishna’s glorious pastimes as a child. The poetic description of the events excels the narration of the same in the Vishnu purana, Harivamsa, and the Bhagavatha purana, which appears to be the main source of inspiration.
It is this manifestation of the natural love of a mother to the child as compared to the love of an aggrieved maiden to her lover which makes Periyalvar different from among the other alwars.

King Vallabha Deva conferred periyazhwar as “Bhattar piran” (scholar in chief) and became alwar’s disciple. With the vast amount of wealth given by the king, Alwar came back to Sri Villiputtur to build a temple for Lord Vatapatra Sayi which you can visit even today. Alwar continued on his maala kainkaryam (garland service), leading a simple life while he enjoyed singing pasurams (hymns) on Sri Krishna. One such day (on Adi pooram day) when he was plucking flowers and thulasi leaves in his beautiful garden, he heard a faint cry of a baby, which appeared as an incarnation of bhoomadevi. He was pleasantly surprised to find a little bundle of joy with beautiful pretty limbs and a divine golden face with great amount of glow. He immediately picked up the female child with both the arms lovingly and showered her with lots of love. When he hugged the child he felt as if it is Lord bala krishnan himself whom he were holding; He was getting tremendous amount of joy by bringing up this blessed pretty girl, whom they named “kodhai” or Andal.