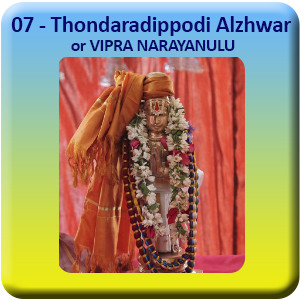 I glorify thoNdaradippodi AzhwAr who composed thiruppaLLiyeLuchi to awake srI ranganAthan considering him the same as paravAsudhEvan and who is to be pampered like an emperor.

Vipranarayana born in a Vedic family, learned scriptures both in Sanskrit, Tamil. He soon became highly devoted to Lord Narayana and wanted to remain as a bachelor. He devoted his whole time in Lord’s service by preparing garlands for him. At a later stage of his life Vipranarayana shifted to Srirangam. He set up a garden with various tulsi, flower and fruit plants and stayed in a small hermitage. Thus everyday he engaged himself in preparing garlands for Sri Ranganatha while singing His glories.

One day two sisters were walking back after a dance performance at the Chola king’s court. As they passed Vipranarayana’s hermitage, the younger of the sisters, Devadevi was captivated by Vipranarayana’s innocence. In spite of the elder sister’s warning, Devadevi wanted to Vipranarayana her slave. So she disguised herself as a monk and on a request Vipranarayana let her stay in his garden, not allowing her to come into the hermitage. He continued to be absorbed in the service of Lord Ranganatha and was not disturbed by Devadevi’s presence.

After a few months, by Devadevi’s luck she got completely drenched in rain and was shivering. Looking at this Vipranarayana allowed Devadevi inside the hermitage and gave her some dry clothes. In this process Devadevi slowly aroused Vipranarayana’s sensual desires and he fell victim for her plans. He now could not think of anything else but her. To sustain her, he sold his hermitage and garden to be on the street. Since she achieved her vow, at once she abandoned him to go back home.

Vipranarayana made several attempts to meet Devadevi, but her mother did not allow him to come inside the house. She expected Vipranarayana to be able to monetarily support her daughter Devadevi. Vipranarayana repented for his mistake of forgetting Lord Ranganatha and lamented profusely.

That night Lord Ranganatha appeared in the king’s dream and narrated the whole incident to the king. The next morning, the king beg his pardon and released both Vipranarayana and Devadevi. The king also restored the beautiful garden for Vipranarayana for him to continue on with his service for Lord Ranganatha. Vipranarayana was moved by the compassion of Lord and became a very humble devotee and called himself Thondaradipodi alwar (The dust of the feet of the devotees)